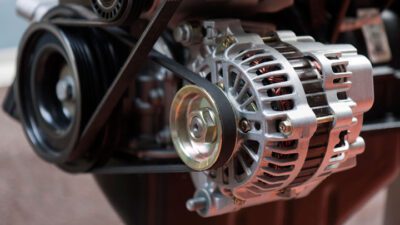 If you’re having trouble getting your car started or just not running as well as it used to, it could be due to an alternator issue. You may not be aware of this until you try to start the car and see that there’s no power or that the battery light is on. However, what does the alternator replacement cost?

If you know how to replace the alternator yourself, you can save money. You will still need to buy a new alternator, which costs roughly $300 to $500, but it won’t have a labor cost. How long does it take to replace an alternator?

If your alternator is showing signs that it needs to be replaced, you may be wondering how long the process will take. The average job takes between one and two hours, but how long it takes for you depends on many factors.

If you are doing the repair yourself, it will take longer than one to two hours because of all the time spent gathering information about what parts to buy and how to do the repair.

How much does an alternator cost at Autozone?

The cost of an alternator at AutoZone varies. There you will find alternators from $104.99 to over $500. The price depends on the brand, the amperage of the alternator, and if it’s a new or rebuilt part. If you have a specific vehicle in mind, we can look up its details and give you an exact price.

What does an alternator do?

The alternator is a vital part of your vehicle’s electrical system, and it’s responsible for keeping the battery charged while the car is running. It also provides power to many other components in the vehicle, from the headlights to the stereo.

A bad alternator can cause the battery to lose its charge or stop working completely, which will leave you stranded on the road. If you are able to drive home and get there safely, it’s important to have your vehicle serviced immediately so that all of its systems continue working properly for years to come.

The serpentine belt is a component of your car’s engine that helps it run smoothly. It is located under the hood and works with your car’s other belts to help the engine run. It also plays an important role in keeping your car’s engine safe from overheating.

Your serpentine belt will usually be replaced at one of the regular maintenance intervals for your car, which can vary depending on the year, make, and model of your vehicle.

Most manufacturers recommend replacing the serpentine belt every 50,000 miles or so, but this can vary depending on the type of driving you to do and how often you drive. If you have any questions about when to replace your serpentine belt, your mechanic will help you.

If you think your car’s alternator may be having issues, you’re probably right. But before you spring into action, it is important to do a bit of research and make sure that your car really needs work done. Here are some common signs your alternator needs to be replaced:

1) Your dashboard lights are out

2) Your battery is dead

4) You smell something burning

5) Your car dies while you’re driving How much is an alternator?

What are the signs of a bad alternator?

Many things can go wrong with a car, but one of the most common problems is a bad alternator. Stubborn, hard-to-diagnose alternator issues are unfortunately quite common.

Here are the most common signs that you have a bad alternator:

Can you start a car with a bad alternator?

Yes, you can start a car with a bad alternator, but it won’t run for long. The alternator is what keeps the battery in your car charged and running, so if you have a bad alternator, your battery will probably die after a few minutes.

If you are driving when this happens, you might be able to restart the car if it dies while it is moving, but it is not safe to keep restarting a car that won’t stay running.

A dead battery is one of the first signs that you may have a bad alternator. When the battery isn’t being charged by the alternator, it can’t power up your car at all. You’ll want to get your alternator checked out as soon as possible if you’re having battery trouble.

How long does an alternator last?

The average life expectancy of an alternator is between 4 and 8 years, depending on the make and model of your car. The longevity of your alternator can be affected by several factors, including whether it was built well in the first place and whether you’ve taken proper care of it.

If you think your alternator may be going bad, you’ll want to watch out for a few signs: the dashboard light coming on (it should look like a battery), dim headlights and interior lights, or the smell of burning rubber. That smell is typically caused by a belt that’s slipping because your alternator isn’t working right.

How do I check my car alternator?

First, you are going to need a multimeter. You can pick these up at pretty much any hardware store.

Next, find your car battery and disconnect the negative cable. This will prevent any potential electrical shock.

Pop the hood of your car and locate where the alternator is connected to the motor. You will see two wires connected to it. These are generally red and black, but if not, don’t worry, as your multimeter should have a tester lead for each color wire: one black, one red.

You should see a reading of between 12v-15v on your multimeter screen. If you are seeing this, congratulations. Your alternator is working just fine.

If you don’t see this reading, but you do see something close to it (like 10v), try touching the metal part of your car’s frame with the black wire that’s attached to your multimeter, as this provides a more accurate reading. If you still get a low voltage reading, there may be an issue with your alternator.

What causes an alternator to fail?

An alternator is the part of the electrical system that charges the battery and powers your car’s electrical systems when the engine is running. If it breaks, your battery will lose its charge, and you won’t be able to start the engine.

Alternators usually fail because of one of these reasons:

Wear and tear: Over time, an alternator can wear out. The bearings in the alternator can get caked with dirt and debris, which will cause friction and damage over time.

Misalignment or mis-adjustment: If your alternator isn’t aligned or adjusted correctly, it could damage itself from too much friction or heat.

How much does it cost to replace an alternator?

The cost of replacing an alternator can vary widely depending on the model and make of your vehicle, as well as where you take it to get it replaced. It could be worth taking a minute to check out the average cost at some local repair shops in your area.

The average cost for an alternator replacement is between $593 and $858. Labor costs are estimated between $457 and $578, while parts are priced between $136 and $280. The estimate does not include taxes and fees.

Note about price: This service is typically done as part of a bigger, more expensive repair, so the estimate you see above may not represent your total cost.

How to fix an alternator?

To fix the alternator, you should follow the step below.

Step 1: Open your hood and locate your alternator.

Step 2: Disconnect the negative terminal from the battery to prevent electric shock.

Step 3: Remove the belt from the alternator.

Step 4: Remove the bolts that connect the alternator to your engine and pull it out of your engine compartment.

Step 5: Take off the plastic cover on the back and remove the rectifier bridge and diodes.

Step 6: Take out your old brushes and spring, then replace them with new ones.

Step 7: Reassemble everything in reverse order of disassembly, then reattach your alternator to your battery and test it out.

Starters and alternators are very similar in that they both produce power to start your engine. However, there are some distinct differences between them.

The starter uses a small motor that rotates the engine. Alternators, on the other hand, use electromagnetic induction to create current for the vehicle’s electrical system.

Alternators are only going to be found on a vehicle that has an internal combustion engine, whereas starters are found in just about any type of motorized machine.

An alternator is an electrical generator that converts mechanical energy into electrical energy while an engine runs. It charges the battery and powers the electric system in your vehicle. If your alternator is bad, you may see things like dim headlights, flickering lights, or stalling out of the engine.

But don’t worry, you can drive for a short time with a faulty alternator, as long as you do not turn on any accessories (like the radio or AC). Your vehicle will normally run until it dies (when you start running off of battery power instead of alternator power).

A starter motor cranks the engine to get it moving. It is driven by a gear on the flywheel of your engine. The gear rotates and turns the crankshaft to get the pistons moving. If your starter fails to crank when you turn it on, then this is likely because of corrosion buildup on the starter contacts or damaged wiring in your battery circuit.

An alternator is a part of a car’s electrical system, and it’s responsible for charging the battery. If you are looking for an alternator replacement cost, you can expect to pay between $150 and $1,000 for parts and labor.

The cost to replace the alternator on your car will vary depending on many factors, such as whether you need the belt that drives it replaced at the same time or if you need other parts replaced that are connected to it.