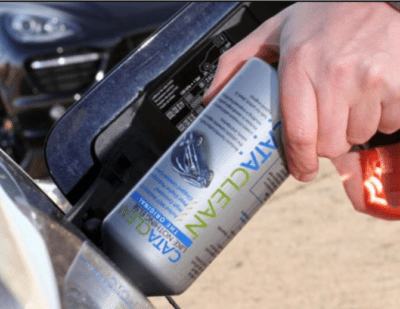 A catalytic converter is a device that reduces the toxicity of emissions coming from your car by turning harmful gases into less harmful ones using catalysts. It converts carbon monoxide (CO) into carbon dioxide (CO2), which is primarily harmless because it naturally occurs in the atmosphere.

Hydrocarbons are turned into carbon dioxide and water vapor (H2O) through the process of oxidation. The nitrogen oxide gases are converted into nitrogen gas and oxygen gas using a catalyst made out of platinum or rhodium metal.

The catalytic converter cleaner is an essential part of this process and must be maintained regularly if you want your car to work well. Catalytic converters can become clogged with soot or other material if they’re not cleaned often enough, and this causes them to lose their efficiency over time, resulting in higher fuel costs for you.

How to use catalytic converter cleaner?

Your catalytic converter will get clogged over time by soot, ash, and other carbon deposits that build up in your exhaust. By adding a cleaning agent to the fuel you put into your car, you’ll be able to burn off these deposits and keep your car’s catalytic converters working at peak efficiency.

Here is how to use catalytic converter cleaner:

The instructions on how to do this will be included with your product but should not require any special tools or skills if you have done any basic car maintenance in the past. You will need to take off your muffler or heat shield if necessary to access the catalytic converter.

Catalytic converter cleaner helps in preventing clogging of this vital component, which can lead to further issues in your car’s exhaust system. In some cases, it also restores performance and fuel economy.

The cleaner works by dissolving carbon deposits on the converter’s honeycomb structure which results in the restoration of the device’s functionality. However, not all converters are designed to be cleaned or restored; if you have a clogged converter, it is best to replace it with a new one.

Some aftermarket products claim that it is possible to clean a clogged catalytic converter, but these claims are not always supported by evidence. Many factors can affect its performance, including age, driving habits, and maintenance practices.

If you want to improve your vehicle’s fuel economy and reduce emissions, then it would be better to invest in quality parts and maintain your car properly.

Why is it so expensive to replace a catalytic converter?

The catalytic converter is a little-known part of your car’s exhaust system. It’s the little thing that converts harmful gases to harmless ones, making your car environmentally friendly and safe for people to be around. You may not see it or think about it often, but you rely on your catalytic converter every time you drive.

Because we don’t give this part much thought, many of us are surprised when it needs to be replaced, and the cost is typically pretty high.

So why is replacing a catalytic converter so expensive?

Well, there are a couple of reasons:

1) The parts are very expensive. A new catalytic converter can cost anywhere from $100 to $2,000, which is a fairly wide range. Generally, the higher the price tag, the more protection you get for yourself and for the environment around you!

2) They’re usually buried deep within your car’s engine compartment. This means that mechanics have to take apart most of your engines to get to them and replace them. And because they’re in such an inconvenient place (and because they’re so expensive), a replacement can take some time. If a mechanic has to spend hours just getting to your catalytic converter, you can never blame them for charging for their time.

How much should it cost to replace a catalytic converter?

The first step in finding out how much it will cost to replace your catalytic converter is getting an estimate from a mechanic. Because the price of replacement varies depending on where you live, the best way to find out what it will cost you is to get an estimate.

How many years should a catalytic converter last?

Regularly inspecting and maintaining your catalytic converter can help you maximize its lifespan and save money on costly repairs in the long run.

Can you clean a catalytic converter instead of replacing it?

Your catalytic converter is your car’s last line of defense against air pollution. It reduces the number of harmful chemicals in your exhaust fumes by almost 90%, so it makes sense that it would get clogged up over time.

This can happen when debris gets into your engine and travels down the exhaust pipe or if your car overheats. The problem with cleaning your catalytic converter rather than replacing it is the same as trying to run a marathon with bad shoes: eventually, the damage will be too much to fix.

If you don’t want to replace your whole catalytic converter, you can try cleaning just the insides of it. This is a complicated procedure that requires you to remove the oxygen sensors from either side of the catalytic converter, then carefully take out any debris inside. You might need to do this more than once before you see results.

The best way to avoid needing to clean or replace your catalytic converter is to keep up with regular maintenance.

What are the symptoms of a clogged catalytic converter?

The symptoms of a clogged catalytic converter are similar to that of any other engine problem and could be caused by something else.

– Check the engine light turns on.

– Lack of power when accelerating.

– The smell of sulfur or rotten eggs coming from your exhaust pipe.

If you have noticed these symptoms, you should get your car to your mechanic.

Can I fix my catalytic converter myself?

Yes, you can fix your catalytic converter if it needs to be replaced, but the job requires a lot of steps and may be difficult for some people. If you’re unsure of your ability or experience, leave it to the professionals.

You’ll need to remove the old catalytic converter in order to install the new one. You’ll need a jack, jack stands, an exhaust hanger removal tool (which you can buy or make yourself), and a socket wrench set.

If your gas mileage has recently gone down, this could be an indication that something has happened to reduce the temperature of the chemical reactions.

To find out what caused your gas mileage to decrease, you should use an OBD II scanner to read through the error codes in your vehicle’s computer system. This will tell you where there are problems with any of the car’s systems.

If there is an error code related to the catalytic converter, then it may be clogged or broken. It may also be damaged by heat from your engine.

If you have trouble finding the source of your problem, you should take your car in for a diagnostic test which will show exactly which part needs fixing or replacing.

Can you put Cataclean in an empty tank?

Yes, you can put Cataclean in an empty tank, but it works best when added to a tank that has some fuel in it. If you drive the car for a few miles and then add the product, you’ll get the best results because it will be able to clean contaminants off your fuel injectors and combustion chamber while the engine is running.

If you add Cataclean to an empty tank, you should keep the tank filled with fuel before use to maximize its effectiveness.

How do you clean a catalytic converter without removing it?

Once you have finished cleaning your catalytic converter, restart your car and let it idle for ten minutes. This should clear all of the cleaning solutions out of your engine.

How do you unblock a catalytic converter?

Catalytic converters are designed to convert toxic fumes from the engine into safer components. They get blocked as they age, and this can affect the performance of your vehicle. If you don’t keep your car in good shape, it could fail to meet emissions tests.

There are many ways to unblock a catalytic converter, but all involve removing the exhaust pipe and fitting access ports on either side of it. You then need to flush and clean the entire unit thoroughly using a proprietary catalytic converter cleaner and wash it down with a strong fuel cleaner.

WARNING: It is not recommended that you attempt this yourself unless you’re confident in your automotive maintenance skills and have access to the necessary tools.

Also, it is not like with a muffler, where you’ll hear a loud rumbling noise. A clogged catalytic converter will make your car sound kind of like it has a revving engine. The gas pedal will be unresponsive, and the car won’t accelerate when you step on the gas.

This can make driving really dangerous if you’re on the highway. You could also see the check engine light come on in your dashboard.

Read:: How to turn off stabilitrak?

Cleaning your catalytic converter with vinegar is a quick, inexpensive way to restore the functionality of your vehicle’s emissions system. You can do it yourself in just a few minutes, using only one tool and two common ingredients you probably already have at home.

Here’s how to do it:

Causes of a clogged catalytic converter?

Another cause of clogged catalytic converters is oil leaking from your engine into the exhaust system. This is caused by gaskets wearing out and needs to be fixed by replacing your oil pan gasket before it causes damage to other parts of your car.

This can also happen if you’ve overfilled your oil, so make sure you always keep an eye on how much oil you’ve added and what the levels are at.

A third common cause of clogged catalytic converters is misfiring spark plugs. You’ll know if this is happening because the Check Engine light will come on in your dashboard lights, and this indicates that there’s an issue in one of your cylinders that needs to be checked out immediately.

Sometimes when you’re checking the status of your car, you might notice that it’s not performing at its best. Your engine might not be running as efficiently as it usually does, or it could be producing more emissions than usual. This can stem from a number of problems, but one thing to keep in mind is that the catalytic converter might be clogged.

You can clean your catalytic converter at home with a catalytic converter cleaner that you can buy online or at an auto parts store. This is usually cheaper than getting it professionally cleaned by a mechanic, but if you don’t feel comfortable doing this yourself, then you should take your car to someone who knows how to do this kind of work on cars.