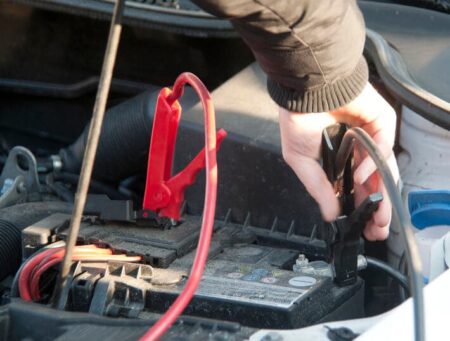 6 ways on how to charge a car battery without a charger? With special inverters, you can charge your car battery without using a car. Or, if you don’t have an inverter, you can place your car battery inside another vehicle and use that vehicle’s alternator to charge the depleted battery.

You can even charge the battery from a truck or SUV or a generator or solar panels – all it takes is some wire.

However, there is more to this single method, as you can try any of the methods I will share with you below. Once you notice your car battery is dead and you do not have a charger, you should revert to any of the options below.

1. Charge car battery with another car

It is the safest way to charge your battery if you do not have the jump cable available. All you need to do is remove your dead battery from the car and then place it somewhere safe and closer to the car you intend to use.

You should open the car’s bonnet and hang it where you will have enough room to do everything you want to do. Then you should start the car. When you start the car, you should disconnect the cables from the battery. The car won’t go off by doing so. Therefore, you have nothing to worry about.

The next step is to connect the cables, and it is the opposite of disconnecting them. You should install the positive before the negative. Once it is firm, you can close the bonnet and allow the battery to charge. It is not a 2-minute task to get the battery up and running. So, you should let the car run for 30 minutes to one hour to revive the dead battery.

2. Using the battery of another car to power the car

If you are going with this method, it is similar to the first above but with slight variation. For this method, you need to depend more on your alternator to do the work after removing the battery that doesn’t belong to you.

Also, when you are connecting your battery, you need to start with the positive terminal than the negative terminal. You should drive the car around for minutes while you trust your alternator to keep it charging.

If the alternator is good and the battery is not bad, it should get charged in the space of 30 minutes but not fully charged. At least it should have the charge that will start up the car easily.

One of the other ways you can get your dead battery back alive is through the use of a jump starter. The Clore Automotive PL2320 20-Amp Fully-Automatic Smart Charger is a perfect device for this operation as it works better for 6V and 12 V batteries. All you need to do is get someone else battery to complete the task of charging.

To charge the battery, you need to open the two bonnets and proceed with the cable installation. You should ensure that the two cars are off. Get the positive head of the jumper, which is read on the positive terminal of the charged battery and the dead battery.

Once you start the car, you should wait for ten to twenty minutes before switching on the car with the dead battery. It should have got some charges that can keep the car running with the help of the alternator charging it. After that, you can gently remove the cables.

4. Use Solar Panel and Solar Charger

If you have a car battery that needs charging, there are some ways you can do it without the help of a charger. You can use solar panels or a solar charger to get your battery back up and running.

If you don’t have access to electricity, or if your power is out for an extended period of time, this method will work best for you. You’ll need two panels and some wire in order to get started.

Now that your panels are attached, place them in direct sunlight for about 10 hours per day for about 2-3 days.

This should be enough time for them to fully charge your battery before removing them from their positions on each side of the car battery so that they can be used again later on down the line when needed again and just make sure they’re facing each other so they’re both getting maximum exposure.

If you’re looking for a way to charge a car battery without a charger, there are several options available. You can use an inverter, which is part of a UPS (or uninterruptible power supply) system. The UPS has an inverter built into it and will convert the DC power from your vehicle’s battery into AC power that can be used to run other devices.

To use this method, you’ll need:

You’ll need to connect your 12V battery charger to your car’s battery using red and black cables. Plug in the inverter, then plug in whatever device you want to power just like your phone or laptop into the inverter.

First, unplug the battery from the car. Then plug in your UPS inverter and turn on the “battery” setting. The UPS will automatically start charging your battery. You won’t need to do anything other than wait for the battery to be fully charged and which should take between four and eight hours depending on its size.

6. Use A Battery Isolator

A battery isolator is a device that allows you to charge your car without having to connect it directly to the battery. This is an especially useful tool for people who have multiple vehicles, or for those who don’t want to leave their car running for long periods of time.

To charge your car’s battery using a battery isolator, follow these steps:

How to charge car battery with home electricity?

If you are considering charging your car battery at home, then I can tell you that it is possible as long you have the right tools for the task. You need an inverter to charge your battery at home using electricity. You just need to ensure the power socket is off before doing anything.

Then you can connect the positive cable to the positive terminal of your battery and the inverter and the same for the negative. Ensure you make the connection rightly to avoid all forms of electrocution or electrical shock.

Once you are sure of the connection, you can switch on the power socket, and then the inverter will get to charge the car battery. It is not the safest or effective means of charging your battery if it is completely dead. However, if it still has some charge, you might be able to bring it back with the method.

How to charge a car battery at home?

If your battery no longer takes charge and you have trouble retrieving your vehicle, you’ll need to take it into the shop or have it towed. In the meantime, though, you can charge the battery at home using jumper cables, a set of alligator clips or clamps, and a car battery charger specifically made for charging auto batteries.

There are many reasons your battery can run down at home, such as leaving one light or any device active in the car overnight. If you are not safe using the home battery inverter, you should consider using the jump starter method. For information on how to do that, you can check the above.

How to charge a car battery with a wall outlet? Yes, you can charge your car battery with a wall outlet. The process is simple and it will work if the battery is drained. You will need to do this project with an extension cord, the charger that came with your car, a voltmeter, and some jumper cables.

With the use of CTEK – 40-206 MXS 5.0 Fully Automatic 4.3 amp Battery Charger and Maintainer 12V, you can easily charge your dead car battery. All you have to do is ensure you make the right connection described by the manufacturer or the manual.

How to charge a 12v battery without a charger?

You should get the MOTOPOWER MP00205A 12V 800mA Automatic Battery Charger from any local store. It is a perfect jump starter that will work best to charge all kinds of 12V batteries. Even if you do not have a charger and the jump starter, you are good to go.

All you need is to get a car with a charged battery or anyone that can spare you his or her charged battery for a few minutes. Connect the jump starter on the two batteries and then keep the car running as the electrical system will get the battery charged.

How do you manually charge a car battery? Manually charging a car battery can sometimes be the only way to bring it back to life when it has been deeply discharged and won’t hold enough charge to start your engine. Automotive batteries are generally big, heavy, and awkward to move, making changing out for a fully charged replacement difficult. There’s also the risk of getting acid on yourself if you remove it.

The method of manually charging a car battery depends on the type of the battery. In all cases, however, the purpose here is to kick-start a chemical process that will cause the battery’s power source to begin working again.

Now that you have connected your manual charger, you will notice that there will be several sets of buttons. One button will carry out a complete charge while another will carry out a partial charge.

How to charge car battery at home without inverter?

If you do not have an inverter at home to use, you should consider using the wall outlet in your home, but you need to get a 12V cable charger to do that.

How do you charge a dead car battery?

If the battery in your car is dead, you can use a portable car jump starter or power station to get the battery charged. First, make sure that your battery and the jump starter are turned off and unplugged.

Now turn on your jump-starter, make sure that both devices are unplugged from each other, then flip your vehicle’s ignition switch to on to charge the battery.

How long do you need to drive a car to recharge a dead battery?

While it depends on what type of car you’re driving, there are some rough rules to follow when estimating how long it will take to recharge a dead battery using your car. If the battery dies, but you start the car quickly, you should run the engine for about 20 minutes before stopping the engine. The hotter it is outside, the more time it will take for your vehicle’s alternator to recharge your battery.

How long to charge a dead car battery?

We recommend you charge the battery for at least 4 hours. Whether the car has been parked two weeks or two months, the battery likely has sulfate crystals that build upon the plates, and you need to get rid of those to get your battery back in good health.

Also, charging (and then driving) overnight is usually the easiest, safest route. Once they’re gone, you can expect your battery to last up to three years, even in the harshest condition.

How to charge a car battery without a charger, and what are the things to do? There are certain precautions to take while attempting to charge a car battery, including wearing rubber gloves and eye protection. It is especially important if you are charging a 12-volt battery; these batteries contain sulfuric acid and can cause injury if touched. In this case, wear protective clothing, eye protection, and gloves.