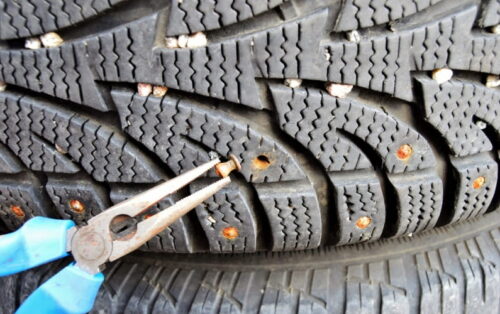 Studs are pressed into tires so cars won’t slide on icy roads. It is an act that most drivers appreciate during winter. Now that winter is over, the next thing for drivers is to remove the studs from the tire. The question is how to remove studs from tires?

Stud removal is a viable and highly inexpensive, and straightforward process that is well worth the effort. Most tire studs can be removed with an ordinary plier and chisel, but the more difficult ones require a heating iron or a blowtorch.

Table of Contents show
1 What are tire studs and their functions?
2 How to stud a tire?
3 Can you get studs removed from tires?
4 When can you remove studded tires?
5 Snow tire stud removal tool
6 How do you remove studs?
6.1 1. Get the tire out of the car
6.2 2. Wash the tire
6.3 3. Lubricate the stud
6.4 4. Remove the stud
6.5 5. Check for leakages
7 Are studs in tires legal?
8 Why are studded tires illegal?
9 How much does it cost to stud a tire?
10 Do tire studs make a difference?
11 Where are studded tires legal?
12 How much does it cost to remove studs from tires?
13 Conclusion What are tire studs and their functions?

Studs are the nails that are pounded into tires to improve traction in winter weather. They can be challenging to remove, but usually, there is a trick that works.  Only a few tires can handle the rigor and challenges of getting adequate traction and grip on snow patched or wet roads.

So, most drivers find it hard to get the perfect performance during winter because of the struggle for balance and stability. It is then the use of studs on tires comes in place. It helps to give the tire the right contact with the road surface for adequate traction and grip.

Therefore, the primary role or function of studs in tires is to give them the balance and stability it needs for outstanding performance during the winter season. With the stud in your tires, you can drive on snow-packed roads without any worries.

How to stud a tire?

Studding a tire is easier to do than removing the stud from the tire after weeks or months. All that you need is to get the studs and the stud gun available for the task. You need to push the stud into the surface of the tire using the weapon.

For effectiveness, it has to be even. So, that means you have to remove the tire from the car and carefully insert the stud on the surfaces. You have to be careful during this so that you don’t end up pushing the stud too much that it can lead to a puncture.

Step 1: Find a stud kit. You can buy one at your local tire shop, or you can order one online.

Step 2: Open the kit and locate the studs. They should be in a small plastic case with a lid on it.

Step 3: Remove the lid from the box and remove the studs from their protective packaging. You’ll need to do this carefully so as not to damage them

Step 4: Insert each stud into its corresponding hole in your tire. The studs will go through the rubber casing of your tire and make contact with its inner surface, which is made of steel. As long as you’ve put them in properly, they should stay in place once you’re done driving around on them.

Can you get studs removed from tires?

The truth is that you can quickly get studs out of the tires when you are ready to do that. Once winter is over, the need for stud comes to an end, and therefore, you need to remove all the studs you have on your tire.

You can remove the studs using a plier, chisel, or stud remover device. It all depends on the tools you have with you. A gentle approach is critical to ensure you don’t damage the tire while forcing the stud out of the surface.

When can you remove studded tires?

The best time to remove studded tires is immediately after the winter season. But if you live in an area where you experience snowfall all around the year, you might want to keep the tire for a year or more. But if otherwise, and summer is getting closer, you need to remove the tire.

Failure to remove studded tires during summer will result in lots of balance and stability issues for you and your passengers. It will indeed affect your performance and makes driving challenging for you and others.

If you want to remove the stud from your tires, you need access to the right tools. The essential tire studs tool is the lubricant. It helps to loosen the tire studs and makes the whole removal task easier for anyone.

The following tool is the plier or chisel that you need to use to pull the stud out of the tire. Those are the essential tire studs removal tools you need for the task.

How do you remove studs?

If you want to know how to remove studs from tires, we have got you covered. We have the correct information for you below, and we hope you find it easy to do following the instruction.

1. Get the tire out of the car

The next thing that you need to do is to clean the tire. The best way to do that is to take the tire closer to your outdoor faucet and wash with a brush or clean cloth to wipe away dirt and dust from the tire. Ensure that it is clean and neat before you get on to the next thing to do.

Once you have left the tire for a more extended period to get dry, you can reach out to start the removal task. The next thing to do is to spray the stud with lubricants. The role of the lubricant is to ensure that the stud becomes so easy for anyone to remove without damaging the tire rubber.

Most people end up damaging the tie rubber because they fail to apply lubricant. They end up forcing the stud out, and that causes some damages to the tire. You can easily avoid that by spraying the tire with the usual dressing spray you use with tires.

Ensure you spray all the areas you have the stud on the tire and leave for some minutes before you carry out the task of removing the stud from the tire.

The final stage of the removal process is to get your plier or any object you wish to use and remove the loosened stud. Leaving the studs after spraying with lubricant will make them get loosen for easy removal. So, you should gently push the plier into the stud and pull them out one after another.

Your tire likely gets damaged in one way or the other, and you should know the state or condition of the tire. So, you should pour water around the tire after removing all studs and check out for bubbles. If you have seen any, it means there is a puncture there, and you should fix it.

On the off chance that you didn’t see any bubble, it means that the tire is in good condition, and you can return to the car.

Are studs in tires legal?

Some states in Canada and USA allow the use of studs during winter for tires. In those states, you do not have to worry about paying any fines or charges. However, some states do not allow stud use on tires, and you could get charged for using it.

Therefore, you must check the regulation and rules of your state regarding the use of studs on tires before you decide to use any. Paying for chargers out of ignorance or less information is painful. So, get your facts before taking any action.

Why are studded tires illegal?

The reason some states ban the use of studded tires is so simple. The metal on the tire ends up damaging the road surfaces even though it gives the proper grip and traction during bad weather conditions. That is the primary reason it is illegal.

It is best for the winter season and a bad one for summer. However, some states do not support using it both during winter and summers, which means you have to invest in winter tires and summer tires for the best performance. You just need to switch during each season.

How much does it cost to stud a tire?

If you are getting a studded tire from the manufacturer, you might spend close to hundreds of dollars because they don’t come cheap. However, if you just want to insert studs into your tires, you should spend less as tens of dollars should clear the bill for that.

Some experts know how to do it. But you can also do the task yourself. Get into some local stores and acquire the stud with the stud gun.

Do tire studs make a difference?

The truth remains that they thus make a significant difference, especially in bad weather conditions. If you struggle to get the proper traction and grip when driving on the snow-packed surface area, the stud will make the whole experience excellent.

The stud will bite into the snow and ensure you have enough contact with the road surface for excellent traction. Getting a studded tire from the manufacturer is a good choice compared to inserting the studs yourself.

Where are studded tires legal?

The fact about the states where they are allowed is that you have a specific time range to use the studded tire. So, you must get to know the season, time, and when to use and when not to use the tires in the states mentioned.

Also, some states in Canada allow studded tires, such as Saskatchewan, Alberta, Northwest Territories, Nunavut, and the Yukon.

How much does it cost to remove studs from tires?

Removing snow tire studs is something you can do all by yourself. The process or step to do that has been explained above. However, if you do not want to risk doing it yourself due to fear of damaging the tire, you can allow the experts do the task for you.

To do that, you just need to get your car to their workshop, and they will carry out the task of removing the snow tire studs for you. It might cost you tens or hundreds of dollars to do that.

Do you want to know how to remove studs from tires? We have the answer to the question on this page. Snow tire studs are savior during winter and life-threatening during summer. So, removing tire studs during summer or after winter is the right thing to do.

You can either pay for the removal or take up the task yourself. If the latter is your option, you can follow the instruction we have on this page. We wish you all the best.