Home » Is low gear good for snow? – All you need to know

Is low gear good for snow? – All you need to know 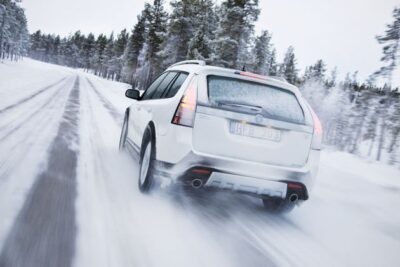 Driving in the snow isn’t just about winterizing your vehicle, making sure that you can see, and packing necessities. Several little tips and tricks can help you maximize safety, control, and efficiency. However, is low gear good for snow?

Yes, low gear is good for snow. Low gear, also known as first gear, helps you accelerate slowly and cautiously in bad weather. It also allows you to maneuver easily when the road is slippery.

Also, low gear is best suited for hill climbing, towing, and driving in low-speed environments. It helps to have low gear when you’re starting on a slippery road, snowing, or incline because it causes the engine to run at a higher speed without forcing you to press down on the gas pedal.

How to drive in snow? Snow driving can be extremely frustrating, but you can learn to drive in it safely with a little practice. Remember to drive slow, keep a safe distance from other cars, and know your braking techniques.

Also, prepare your car for winter weather and know how to handle skids. One way to drive in snow is to use all-wheel drive. This type of vehicle contains a transmission that can apportion power between the front and rear axles.

When the system senses traction issues, it will send more power to one of the axles, which are the parts that connect the wheels and tires to the vehicle. Likewise, more torque or power will be transferred to the axle linked with a gripping axis if a tire loses traction.

This, in turn, keeps all four wheels on the road, ensuring that your car moves forward even on slick roads.

When to use gear 1 and 2 in automatic?

In automatic transmission vehicles, use first gear to get the vehicle moving. First gear is typically used when the vehicle is stationary or moving very slowly and can be used in these situations on slippery surfaces without causing damage to the drivetrain or transmission.

When moving off from a stationary position, first gear should be used by depressing the brake pedal fully and putting the car into Drive.

In summary, Gear 1 should be used when driving in low-traction environments such as mud, sand, or other off-road conditions. Gear 2 can be used while driving at low to moderate speeds on snow and ice or towing a trailer.

What gear to use when going uphill?

When you’re going downhill, you can use any gear. But for the best results when going uphill, use it in first or second gear.

When going uphill, you’ll want to use a lower gear to maintain a high cadence and power output (the rate at which you’re pedaling). Reduce resistance by shifting into an easier rear cog.

Therefore, the first step to climbing hills is shifting to low gear. Look down at your gear shifters and find the smaller ring of gears on your front chainrings. If you’re in a middle or higher gear, shift into the smallest gear by clicking the shifter a few times.

Then, quickly shift up again to the middle or highest front chainring, depending on the climbing hill. Lower gears use less effort to pedal, but they also make your bike go slower.

In what situation will you need to use low gears?

Low gears are useful when riding up a steep hill or learning how to ride. Low gears are also great for climbing steep hills and starting from a standstill.

Also, when your car is stuck in snow, mud, or sand, the best option is to select a low gear. In addition, when you need a lot of power from your car, such as when driving up a steep hill, carrying a heavy load, or towing.

Furthermore, low gears are used for low speeds and high loads, such as starting from a complete stop, going up steep hills, and achieving the shortest possible stopping distances.

What does the s mean on a gear shift?

The ‘S’ on a gear shift stands for Sport mode. This mode is mainly used for racing cars on a track. It will not alter changing times but may give you more torque at the rear wheels during acceleration.

Simply put, s stands for Sport. When you have it selected, it will change the driving personality of the vehicle, just like a software update.

This applies to everything from acceleration to shifting points, but not to a point where it becomes a detriment to the car. For example, say you want to take the car on a track day or pass someone on the highway faster than normal.

How fast can you drive in low gear?

You can drive up to 70 mph in low gear in a manual transmission vehicle.

It seems like some people think they can just put their vehicle in low range and haul down the road at 70 mph. However, the low range is designed for off-road use, not high speeds.

What does the b on the gear shift mean?

The b on your gear shifter stands for transmission brake or manual torque converter lockup.

When you shift into this mode, your vehicle’s transmission will either lock the torque converter or rear differentials, which means you’ll only be able to drive at low speeds, and your engine RPMs may go above the normal range of about 1,000 to 3,000 RPM in third gear.

Typically, these modes are designed for use when driving on slippery surfaces like snow, ice, or sand, but you can also use it to increase downforce when driving at high speeds in turns on a track if it is programmed into your car’s computer system.

Also, the ‘B’ in the gear shift lever of a Toyota Corolla stands for Brake. When the Corolla is in B instead of D, it overrides the automatic transmission and allows the car to start on a hill.

When the driver takes his foot off the brake and presses on the gas, the car stays in first gear instead of immediately shifting into second gear. What does m mean on gear shift?

The M is used to help select the best gear while towing a load. For example, it will put you in a lower gear changing the shift points on the transmission—better pulling and torque.

Also, M means manual transmission mode. Your shift lever position is designed for the most efficient use of the engine and transmission components.

Transmission or gear shift tells you what gear your transmission is in. It might include letters or numbers, such as ‘D’ and ‘3’. Different combinations indicate the gear you’re in.

What does the l mean on a gear shift?

The ‘L’ in many automatic transmission vehicles stands for Low and indicates the lowest gear set for the transmission. The low range is used when more power is needed for towing or steep uphill driving.

Also, the L is the most powerful gear and provides the least amount of air resistance to the engine. Most cars have four forward gears, with a lower bogie set for reverse and parking.

Should you drive in low or high gear in snow?

Snowstorms present special driving challenges. Many drivers are unsure whether it is better to drive in a lower or higher gear when roads are snowy.

The low gear slows your vehicle’s speed, while the high gear allows your tires to spin faster and maintain traction against the slick road surface, thereby preventing sliding or skidding.

You should generally drive snow tires at the same speed you would drive on dry pavement. If you drive too slowly on a highway, the tire will squirm, which can be dangerous. It is safer to drive just below the speed limit in high gear than to drive more slowly in low gear.

Is it ok to drive in low gear?

Yes, it’s fine to drive in low gear for short periods when the going gets rough. However, driving in low gear longer than necessary is wasteful.

The automatic transmission reduces engine speed and increases torque, saving fuel and reducing wear and tear on the vehicle compared to manual transmissions that allow you to shift at will.

So while driving in low gear is good when you need it, when you don’t need it, return the gearshift lever to a higher gear as soon as possible.

What is 2nd gear used for?

In addition, 2nd gear is used to keep the engine in its powerband, or rotational speed range where the engine operates most efficiently and produces the most torque. It can also be used for traveling at steady speeds on level roads.

The second gear works as an overdrive gear. As a result, the engine will stay in its power range and cruise at a much lower RPM(Revolutions Per Minute). Second gear is also used to increase power and reduce stalling when going uphill.

The second gear gives you good acceleration without using as much gas. If you try shifting into 3rd gear, it won’t have as much acceleration, but it uses less gas at a higher speed than second gear because the car isn’t turning its wheels as fast.

What happens if you drive in l?

Nothing happens if you drive in the l on a straight road, but some people find it strange and think you are driving too slow or are learning to drive.

Can I shift from d to l while driving?

Yes, you can shift from d to l while driving. However, it is better to shift the gear when the vehicle comes at rest or slightly slow down.

If a car is being driven on a highway and suddenly shifts from d to l, it may cause stress on the drivetrain and fail in the engine.

No, Low gear makes you go slower but with more force, so it’s best for climbing. However, you will go faster in high gear on the flats.

Low gear isn’t necessarily a setting that makes you go faster, but it does make you more efficient. The low gears on cars are great when starting, going uphill, or just for comfort.

Is low gear good for snow? Yes, driving in low gear is good for snow since it can provide more torque. In addition, driving in a lower gear gives your wheels a higher rotational speed. This results in quicker acceleration and helps you push through the snow.

While low gear can be helpful in certain situations, like driving uphill on ice, other features are more important: all-wheel or four-wheel drive and winter tires.