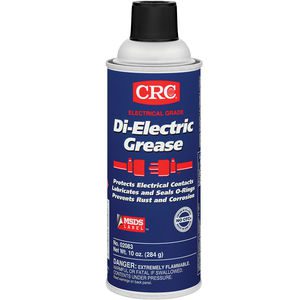 Dielectric grease is a specialized type of lubricant that is non-conductive, meaning that it does not conduct electricity. That’s because it’s made from silicone oil, which has very good insulating properties. Dielectric grease is used in high voltage applications to protect electrical connections from water and other contaminants.

It is a waterproofing compound that can be applied to electrical connections and components to prevent moisture, salt, and other contaminants from corroding or otherwise damaging the connection. The primary ingredients in dielectric grease are silicone oil and a thickener. The silicone oil prevents water from penetrating into the connections, while the thickener helps it to stick to the contacts and resist being washed away by rain or sprayed out by water pressure.

Dielectric grease can also be applied to non-electrical components such as threaded fasteners, where it will help them to turn smoothly without galling or seizing up.

Spark plugs are no exception as they are electrical connections that need to remain corrosion-free and clean in order to work properly.

If you are unsure about whether or not a certain grease is safe, check the label, as it should indicate whether or not it can be used on wiring. If it doesn’t say, don’t risk it and go with a different grease that clearly states its safety for electrical connections.

Dielectric grease is a specific type of silicone-based grease. It has excellent dielectric (aka insulating) properties and does not conduct electricity. This makes it useful for preventing electrical components from corroding or getting damaged by moisture or dirt.

While silicone grease and dielectric grease can be used interchangeably in some situations, there are also some important differences between the two that means you shouldn’t just use them interchangeably without thinking twice.

First of all, while silicone grease is typically good at resisting UV rays and ozone degradation, dielectric grease is not, which means it can end up cracking.

Dielectric grease is an insulating compound that can be used to increase the performance and reliability of electrical connections. It is a dielectric, which means it does not conduct electricity, and it can be used to lubricate connectors, terminals, and rubber seals in electrical components.

Yes, you can use dielectric grease on battery terminals. It helps to protect against corrosion and lubricates for a better connection, and improves the longevity of the battery.

You can use dielectric grease on battery terminals, but you should be careful when doing so. Dielectric grease is a type of conductive grease which is designed to improve the connection between electrical components.

This is great for batteries because it helps to prevent corrosion and maintain a strong connection between the terminal and the cable. However, it’s important to make sure that you don’t get any grease on the cable itself, as it may interfere with the flow of electricity and cause problems.

Depending on how much dielectric grease you use, it may be necessary to clean off excess before installing your car battery. This can be done with a dry cloth or paper towel.

Yes, dielectric grease does conduct electricity. It is a non-conductive grease, but it does have some conductive qualities.

Dielectric grease is made to be used in different electrical applications and components, such as spark plug boots, battery terminals, and more. It works by acting as an insulator that prevents the buildup of oxidation on the electrical elements of these parts. It also provides lubrication that helps stop corrosion and moisture from forming.

Also, dielectric grease can help seal out water and keep moisture out of electrical parts. Using it in these types of applications can extend the life of the part or component.

If you don’t use dielectric grease, your spark plugs can corrode more easily, which can make them not work properly or stop working at all. The grease also helps keep moisture away from the electrode and other areas of the plug where water could cause problems. Dielectric grease helps fill in spaces that water could get into and cause rusting or other damage to occur.

Can dielectric grease cause a short?

The circuit may appear to work correctly when it’s first turned on, but after the dielectric grease heats up, it may slowly begin to melt, allowing current to pass through the circuit and causing a short.

What is the purpose of dielectric grease?

The purpose of dielectric grease is to protect electrical components from corrosion.

It also prevents the build-up of moisture in electricity-conducting materials by keeping water from being able to get into the space between the two surfaces. Basically, it’s a grease that allows electricity to keep flowing without any interruptions.

In addition, dielectric grease lubricates moving parts that conduct electricity. For example, battery terminals or spark plug wires. It can also be used as an insulator to prevent short circuits since it’s non-conductive and has high dielectric strength.

Is Vaseline a dielectric grease?

Vaseline is a dielectric grease. Its purpose is to prevent the formation of rust and corrosion on metals. Basically, it acts as a barrier between two surfaces that would otherwise corrode when they come into contact with each other.

You can use Vaseline to lubricate the moving parts of your car, so they don’t rust or wear down over time. If you want to protect electrical equipment which often gets wet, like wires, motors, etc., then Vaseline would be perfect for this because it will prevent water from getting into them, which can cause damage over time.

However, due to its chemical makeup, I would not recommend using Vaseline in any applications where there is a chance for it to come into contact with oxygen or water vapor because this could lead to oxidation which may cause problems down the road.

How does it work? The grease creates a barrier around the connector that prevents moisture from entering. This barrier also prevents corrosion from forming on the metal parts inside the connector.

When you use dielectric grease to protect your electrical connections, you’ll notice less resistance in them and an improvement in overall performance because of this resistance reduction.

Where should you not use dielectric grease?

If you use dielectric grease on these parts, they will not be able to make a good connection, and they will likely stop working as they should.

Here are a bunch of places where you should use it, including:

But there are a few things you should never use dielectric grease on, including:

– Brake light switch connectors (these are sensitive to corrosion)

– Fuses and circuit breakers (they’re sensitive to heat and moisture)

Is white lithium grease the same as dielectric grease?

You might be surprised to hear that white lithium grease is actually the same as dielectric grease, despite the fact that they are often marketed differently.

White lithium grease is mostly used for metal-on-metal and metal-on-plastic applications. It has a higher melting point than petroleum-based greases and is commonly used as a lubricant for moving parts. These include door hinges, window tracks, power tools, garage door tracks, and more.

Dielectric grease is used with electrical connections in order to prevent corrosion caused by moisture or humidity. This grease also helps protect against oxidation and is most often used to protect battery terminals and spark plugs from corrosion.

Should you put dielectric grease on ignition coils?

Ignition coils are responsible for transferring the small current from your battery to the spark plugs, which creates the spark that ignites the fuel/air mixture in your engine. Ignition coils are prone to failure, so you may be wondering how you can prevent this.

One of the most common questions people ask about ignition coils is whether or not they should put dielectric grease on them. Dielectric grease, also known as silicone grease, is a non-conductive, waterproof compound you can apply to things like screw terminals and wire ends to protect them from corrosion caused by moisture.

You should NOT apply dielectric grease to an ignition coil because it will disrupt its function by preventing the proper transfer of electricity. It’s best to leave your ignition coils alone so they can do their job properly.

What happens if I use too much dielectric grease?

Unfortunately, yes. Dielectric grease, like all greases, will expire if exposed to air, heat, and light.

The exact amount of time that a can of dielectric grease will last depends on how well it’s stored. If grease is stored in a cool, dark place, it can last ten years or longer. If left out in the sun or at room temperature, however, its lifespan will be reduced to just two years or less.

Can dielectric grease be used on a circuit breaker?

It really depends on your circuit breaker, but in many cases, you can use dielectric grease on it. The main thing to look out for is the amperage, or amp rating, of the circuit breaker.

If the circuit breaker is rated at 250 volts and has a 15-amp rating, then you’ll want a grease that has a dielectric strength of 400 volts per mil. This means that it’s safe to use with voltages up to 400 volts.

The other thing to consider is how much voltage you’re going to be using with your circuit. A 12-volt circuit would need a grease with a dielectric strength of 24 volts per mil because the voltage on each side of the circuit will be 12 volts.

So, if your circuit breaker has a 15-amp rating, you should find some dielectric grease that has an amp rating higher than 15 amps and can handle voltages above 250 volts.

If all else fails, try contacting the manufacturer of your circuit breaker to see if they have any recommendations on which type of dielectric grease to use.

It’s not a bad idea to use dielectric grease when working on your electrical components. It’s a conductive substance that comes in the form of a paste or gel, and it can be applied to rubber “O” rings, rubber gaskets, and other components of your electrical system.

You can also use it to lubricate electrical connections and terminals. When used correctly, it helps to prevent corrosion, which makes sure that your devices work as intended.